The Gambia Launches National Referral Mechanism for Protection of Vulnerable Migrants, including Victims of Trafficking 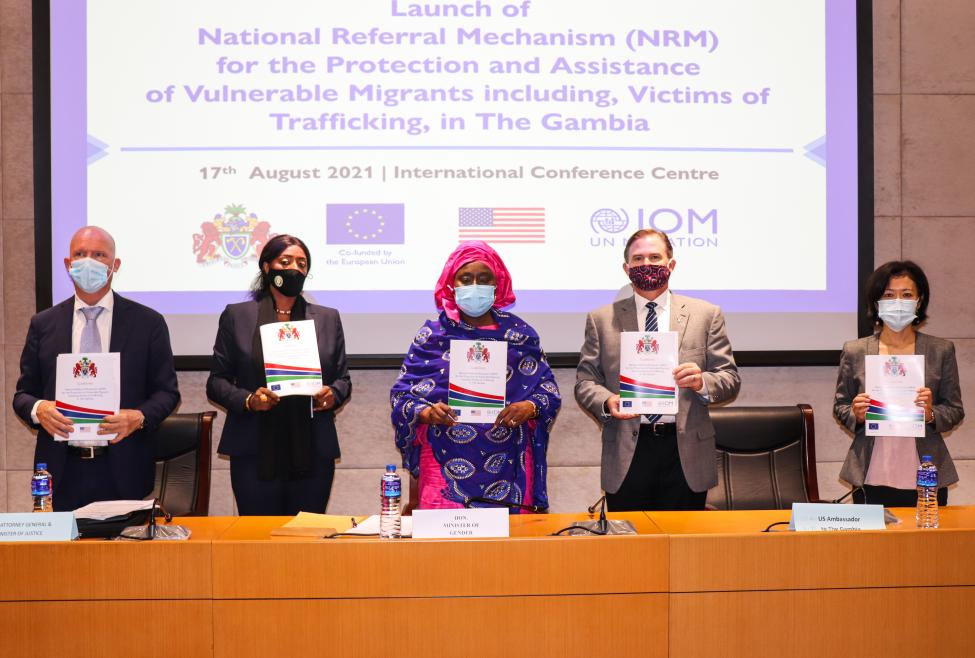 Banjul - On 17 August, The Gambia launched its National Referral Mechanism (NRM) for the Protection and Assistance of Vulnerable Migrants, including Victims of Trafficking – the first comprehensive framework that outlines the roles and obligations of state and non-state actors to protect and promote the rights of migrants.

The development of the NRM was made possible through the https://www.migrationjointinitiative.org/">EU-IOM Joint Initiative for Migrant Protection and Reintegration, funded by the EU Emergency Trust Fund for Africa, and Supporting National Efforts to Combat Human Trafficking, funded by the US Department of State’s Office to Monitor and Combat Trafficking in Persons.

The process of developing the NRM commenced in February 2020, under the leadership of the Ministry of Gender, Children and Social Welfare and the Ministry of Justice. Following this, two working groups were established to map state and non-state service providers that were best equipped to deliver crucial assistance to vulnerable migrants. In institutionalizing the referral process to these services, the NRM improves cooperation and coordination among various stakeholders involved in identification, protection and sustainable reintegration of vulnerable migrants, including victims of trafficking.

“The NRM will strengthen the Government’s response and bring together all of The Gambia’s key service providers by establishing standardized guidelines and procedures for all service providers to closely adhere to,” emphasized Hon. Fatou Kineh, Minister of Gender, Children and Social Welfare. “It will therefore have a vital role to play in coordinating and optimizing support, including to returnees, and will contribute to the stability and security of our country.”

Furthermore, under the NRM, Standard Operating Procedures (SOPs) were validated in August 2020 specifically for the purpose of identifying specific roles and responsibilities and procedures to afford protection and assistance to vulnerable migrants, including victims of trafficking.

“The fight against trafficking in persons is a priority task of the Government of the Gambia,” emphasized Hon. Dawda A. Jallow, Attorney General and Minister of Justice. “The NRM institutionalizes specific steps and roles for key ministries and other stakeholders.”

In November 2020, a training curriculum on the SOPs was developed, with an initial training of trainers for 26 officials taking place in December 2020. Participants included law enforcement officers, social workers, health professionals, consular staff and civil society actors – all of whom play a role in the effective operationalization of the SOPs.

“Today’s launch is the result of a series of consultations among key government and non-government stakeholders working on migration, as well as IOM and UN agencies,” remarked H.E. Corrado Pampaloni, EU Ambassador to The Gambia. “To strengthen migration management, to address the challenges and to respond to the needs of vulnerable migrants requires a holistic, coordinated and collaborative effort.”
“Applying the NRM will ensure that victims do not fall through the cracks,” explained H.E. R. Carl Paschall III, US Ambassador to The Gambia, referencing the NRM’s key role in protecting victims of trafficking. “The work to launch the NRM is the next big step and big challenge for implementation.”

IOM looks forward to providing further support to the Government of The Gambia in the implementation of the National Referral Mechanism by building the capacity of protection actors in all the regions of The Gambia, in collaboration with the trainers identified during the development of the NRM.

Subscribe to IOM newsletter to receive the latest news and stories about migration.